Its SW200 Index is based on the 200 most popular stocks from the 200 best performing SWF user portfolios. It’s a true peer endorsed index, with the top 200 performing portfolios being some of the best in Australia.

When you consider the Australian stock market had a fairly average 2017 — the ASX 200 Index gained around 7% for the year – SWF’s technology looks quite powerful.

What was impressive was the return generated by the SW200 Index. The 200 stocks that make up the SW200 Index outperformed the benchmark index by 52% over the year, and by 76% in the six months to mid-February.

Results aren’t the only measure of likeability here either.

It also offers the unique SelfWealth PREMIUM service — a social investment network that’s been described as Facebook for investors.

The community of like-minded investors is unlike anything else available in Australia. Using complex machine learning and artificial intelligence (AI) diagnostic tools it filters and ranks the best investors in the network, helping investors construct outperforming portfolios. The larger the community swells (well over 30,000 now), the smarter it becomes.

The combination of SWF’s two services — SelfWealth TRADING and SelfWealth PREMIUM — are not only excellent tools for customers of SWF, but also for potential investors in the SWF stock itself, with diversified revenue streams growing the business.

Of course, SWF, like all junior stocks is highly speculative and investors should seek professional financial advice if considering this stock for their portfolio.

User numbers continue to rise, while management is taking further active steps to introduce new revenue streams. The first of these will be allowing for international trades on its platform via its partnership with software provider OpenMarkets.

Another is a new partnership with Essendon Football Club, which could put it in front of hundreds of thousands of AFL fans.

SWF plans to further diversify its offerings with an ETF listing scheduled for later this year, while margin lending, data licensing, and advertising are in management’s sights.

All the latest from:

SelfWealth Limited (ASX:SWF) has delivered the first iteration of Stockbroking version 3.0 to Australia.

Stockbroking 1.0 is a traditional stockbroking firm as we know it, where a client speaks to an actual stockbroker who trades on their behalf.

This progressed in the 1990s to Stockbroking 2.0 with the advent of online trading and self-directed investors.

Stockbroking 3.0 is the coming of age of cloud computing and where trading systems are housed in sites such as Amazon Web Services (AWS). This enables significant instant scalability, removing the need for expensive and increasingly old legacy in-house architecture, and it cuts the previously required high staff numbers.

SWF is the first of these 3.0 brokers to launch in Australia. It is also Australia’s only flat fee online trader. That combination, along with SWF’s social network of investors, or peer-to-peer community, makes it a truly unique offering.

We last updated you on SWF, back in January with the article, Newly Listed Online Broker Delivers Low Cost P2P Portfolio Construction Tool, where we discussed the company’s listing and gave a rundown of its technology.

Further background can be found in the article below which sees SWF Managing Director Andrew Ward discuss with finfeed.com how the company is disrupting the finance industry: 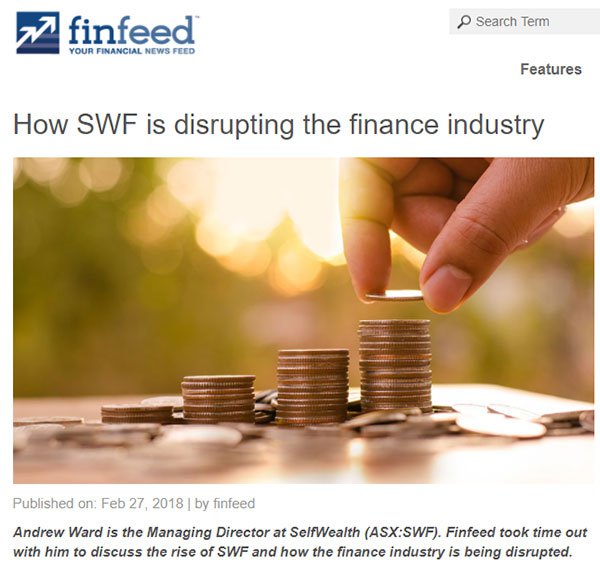 The first thing that stands out about SWF and its online trading platform is that SWF’s trading costs are significantly more attractive than other online brokers’. SWF offers low and transparent pricing with one flat fee of $9.50 for each trade, regardless of size.

Here you can see SelfWealth compared to other major online brokers in Australia: 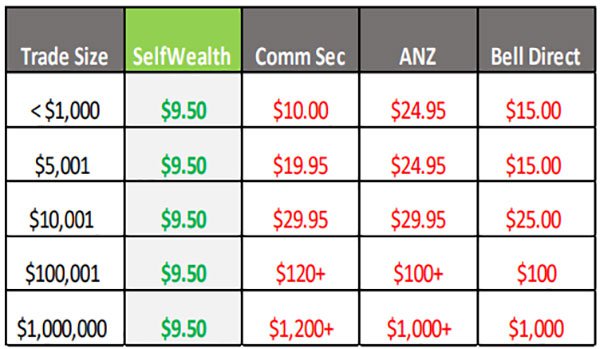 Alone, SWF’s brokerage fees make it an extremely enticing option for investors when compared to other online brokers in Australia.

Due to high overheads, many of SWF’s competitors simply can’t afford to compete with them on price. Many are owned by the big banks that have sunk hundreds of millions of dollars into their solutions that need to be recouped.

Yet for investors, high transaction fees can make a massive dent in their total return, and with Australians well known for being charged some of the highest transaction fees of any market in the world, cut-price and flat fee brokerage are a highly attractive feature for Aussie investors.

SWF operates a CHESS-sponsored online broking platform — a detailed that shouldn’t be overlooked as this means that the clients legally own the stock. This is unlike many online brokers, including some well-known groups like IG Markets, where the client doesn’t own the stock, instead the custodian legally owns it and can on-sell or lend that stock to others to short the market.

Another fact providing peace of mind to SWF clients is that all client monies are held with ANZ, fee-free. That means that deposits are of up to $250,000 each are protected under the Australia Government’s Guarantee Scheme.

SWF recently transitioned across to OpenMarkets for clearing and settlement with a superior flat fee brokerage arrangements.

This transition also increases elements of SWF’s other revenue streams and will allow direct international trading in 2018 via OpenMarkets’ arrangement with Saxo.

Its low fees were recognised when the company was awarded Money Magazine’s Best of the Best 2018 award for ‘Cheapest Online Broker’. 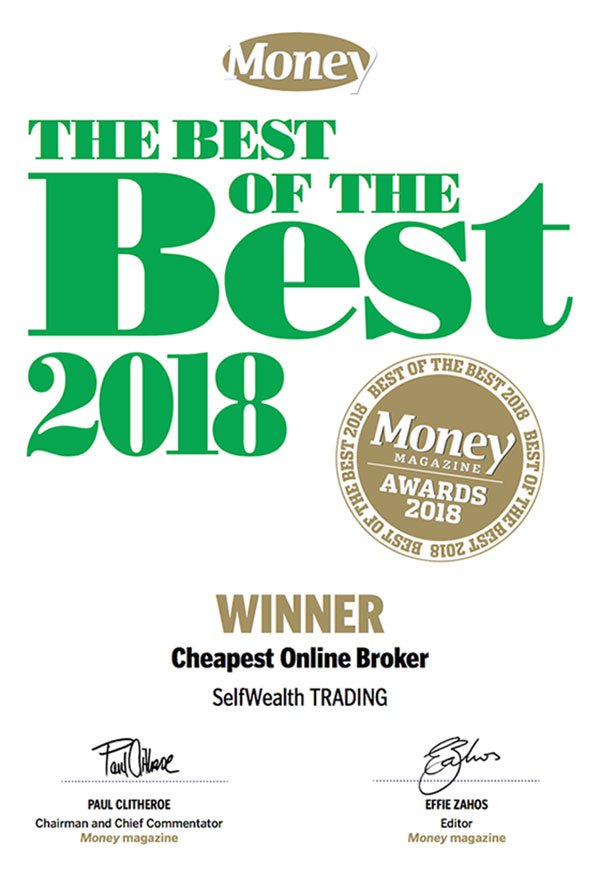 SelfWealth PREMIUM — the company’s premium plan — is an online network that enables members to track and target the performance of thousands of other portfolios in the community to assist their own investing.

It’s a social peer-to-peer network that uses the collaborative intelligence from the community to construct portfolios. It provides members with a range of performance enhancements alerts and emails, including:

SelfWealth Premium is free for the first 90 days of a client’s SelfWealth membership, and then costs $20.00 per month.

SWF has developed two key diagnostic tools — SafetyRating and WealthCheck Score — to ‘stop the lemmings go over the cliff’, in the words of SWF Managing Director, and former CBA banker, Andrew Ward.

For each of SWF’s 30,000+ user portfolios these two diagnostic tools measure diversification, asset allocation, valuation, peer-to-peer comparison and performance. They are a much better proxy for future outperformance against the benchmark as members search and filter for the best investors based on these tools and not outright performance alone. SelfWealth then helps them to construct better performing portfolios. 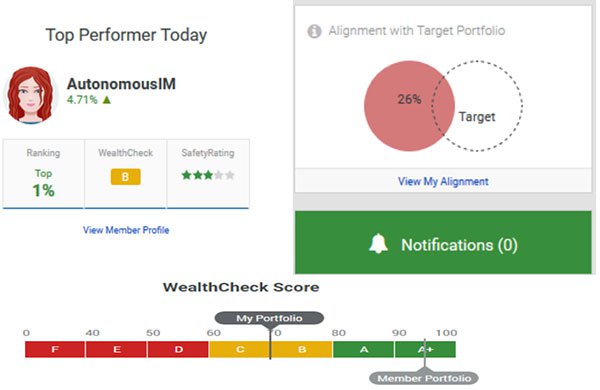 SWF’s business model is underpinned by three existing revenue streams and it has scope to add multiple additional sources in the medium term.

That is some way down the track and therefore investors are urged to take all publicly available information into account when considering SWF for their portfolio.

Here are the existing revenue streams:

SWF has multiple distribution channels established, including direct to consumer, and business to business agreements:

In addition to the expected growth in user numbers and brokerage revenues, SWF has plans to expand the business in a number of ways.

Imminent revenue streams include those from the SWF Exchange Traded Funds, and International Shares trading, while SWF has visions of future revenue streams from there that include margin lending, data licensing, and advertising.

SWF will soon provide clients the option of investing in international markets. With ASX-listed stocks making up only around 2% of the public listed companies worldwide, this is a decision that should be well received by users.

The company’s integration with OpenMarkets and their arrangement with Saxo makes this offering possible.

SWF has recognised that self-directed investors are increasingly astute at monitoring the market and stock picking. Its SW200 Index is a true peer endorsed index, with the top 200 performing user portfolios being some of the best in Australia, with the returns to prove it.

The performance of the funds is distilled to the top performing 200 SMSFs by WealthCheck score on a quarterly basis and the top weighted 200 stocks therein. 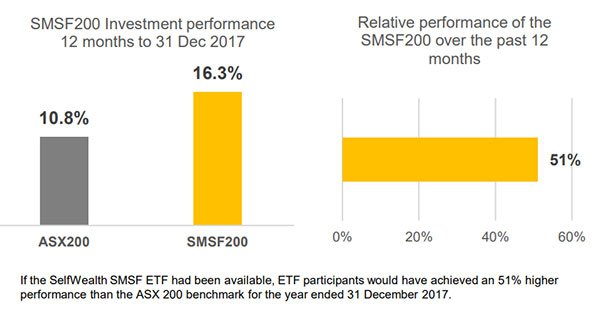 Following the impressive outperformance of the SWF200 Index when compared to its benchmark, the ASX200 Index, SWF plans to list the SelfWealth SMSF200 ETF (ASX:SELF) on the ASX in April this year.

SWF will offer an Australian representative ‘Self Managed Super Fund ETF’, sourced from a large SMSF data base.

The ETF will be based on the existing SWF200 Index, powered by the 30,000-plus Self Managed Super Fund (SMSF) portfolios and constructed using SWF’s proprietary WealthCheck score. SWF has made a strategic partnership with software provider BGL Corporate Solutions where SMSF data will be sourced from the BGL Simple Fund 360, which is BGL’s cloud solution. BGL is Australia’s largest SMSF administration and compliance software provider.

Adding to the company’s bottom line SWF will charge investors in the ETF a 0.82% management fee, which will generate a profit margin of around 70% at scale.

SWF saw rapid growth across all key metrics over the first half of 2018, compared to just 12 months earlier. These include the number of active users rising by more than 1400%, revenue jumping 1224%, and others metrics including trade volume, client stock holding, and clients’ cash all rising, as below.

Clearly SWF is rapidly gaining pace and it continues to actively look for ways to get its product in front of a larger audience...

SWF clearly has the goods — with the lowest flat fee brokerage on the ASX as well as its outperforming user constructed portfolios, as well as new products in the works.

However, SWF and its shareholders are hoping to see more mainstream recognition of the platform and its benefits. To help achieve widespread recognition, SWF has partnered with the Essendon Football Club as its Official Online Investment Trader.

The new partnership was unveiled in front of more than 500 guests at Essendon’s 2018 Season Launch at Aerial in South Wharf, Melbourne.

The partnership is an important milestone in the evolution of SWF which will help it become nationally recognised. 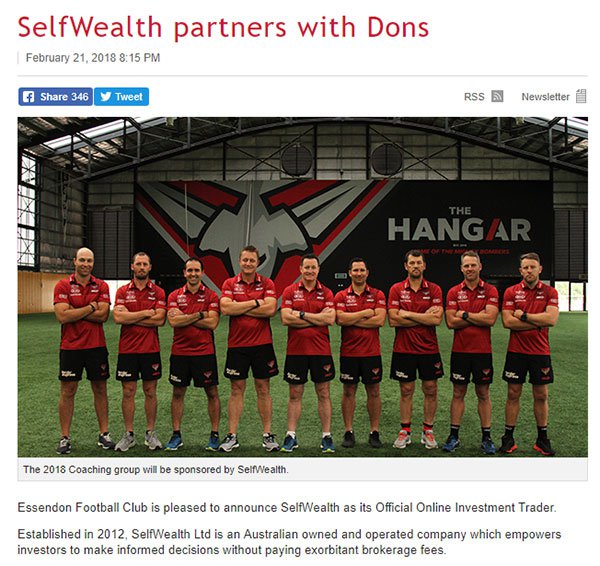 Big things ahead for SWF

Whilst SelfWealth’s pricing, technology and scalability are compelling, the immediate challenge is building brand and trust. It’s tackling this with a focus on developing its distribution channels and newly announced partnership with one of Australia’s most recognised brands — the Essendon Football Club.

It still has a long way to go to achieve its aims, however, so investors should seek professional financial advice if considering this stock for their portfolio.

SWF already has what investors want – the lowest flat fee brokerage on the ASX. Adding to that its major point of differentiation: the SWF community...and the impressive performance of its user-constructed portfolios and SWF200 Index.

SWF has identified and targeted some significant market opportunities. New revenue streams are in the works from the soon to be listed SelfWealth SMSF200 ETF (ASX:SELF), as well as adding International Share trading to its platform’s offering. 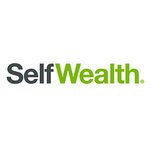