Harvesting is underway at CropLogic Limited’s (ASX:CLI) hemp trial farm in central Oregon where the company is successfully demonstrating that its agronomy, farm management and ag-tech expertise can be successfully applied to industrial hemp.

Not only is CLI proving up its ag-tech capabilities, but it is also now a verified industrial hemp supplier.

The first hemp biomass shipment has now been made from the hemp trial farm under a US$10.5 million (A$15.4M) supply agreement entered into back in August. The company will continue to deliver under that contract, making weekly shipments of industrial hemp for the duration of the harvest with payment received immediately after each weekly shipment.

Yet this US$10.5 million contract is not the extent of CLI’s crop for the season. The harvest remains on track and this supply agreement represents less than one-third of the estimated total harvest, which as of last week is said to be progressing well and to schedule.

Keep in mind that this is from a ASX junior that’s capitalised at less than $20 million. CEO James Cooper-Jones explained the shipment’s significance:

“This milestone caps off a seed to sale story for the hemp trial farm and speaks volumes to CropLogic’s agronomy, farm management and ag-tech expertise.”

In addition to announcing this milestone, CropLogic has also put to bed unsubstantiated detrimental statements that were made on social media channels, seemingly directed at manipulating the company’s share price. 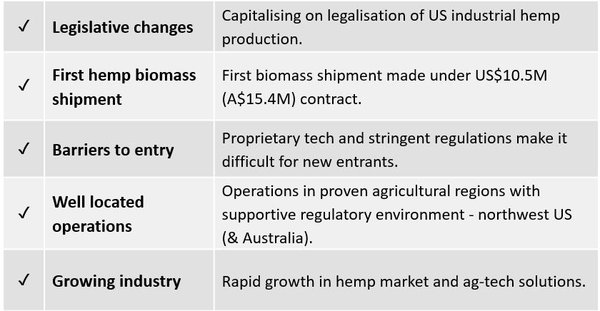 For background as to how CLI arrived at this point, check out our last update on the company from August.

Read: CLI’s Strategic Move into Hemp CBD is Paying Off.

CropLogic has commenced its first biomass shipment this week under the supply agreement with Deschutes Labs that will see CropLogic receive US$10.5 million (A$15.4M) with payment received after each weekly biomass shipment. 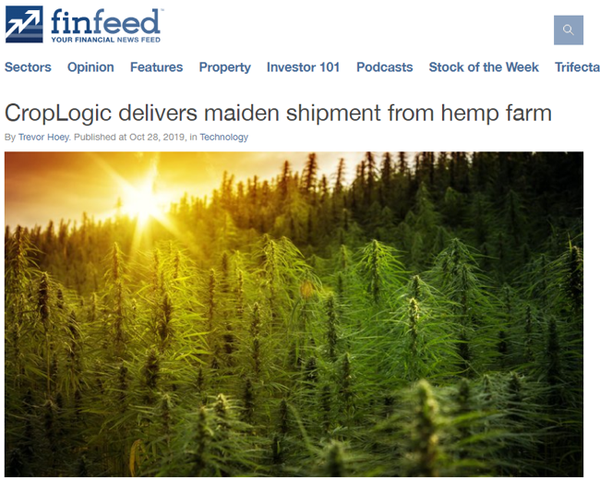 Deschutes Labs is a new industrial hemp processing facility located in Central Oregon that has a phase 1 processing capacity of over 10,000 pounds per day. It’s licensed to produce food grade extracts and designed and operated according to GMP and ISO 9000 standards.

That deal was announced on 6 August and covered in the article below:

In the lead up to this initial shipment, compliance testing confirmed that all fields under the hemp trial farm had a THC level not exceeding the limit to be treated as industrial hemp.

The company say that the harvest timeline remains on track and is progressing well. The methodology of swathing (or ‘windrowing’), field drying and then combining biomass has been successful.

One of the stated purposes of the Hemp Trial Farm is to trial different cropping methodologies that can be applied at scale. This includes the harvest process for Hemp biomass.

Generally, a four step process is being employed that includes:

So far, CropLogic, along with buyers, has been pleased with the consistency of biomass material from the combine, which has reduced or entirely eliminated the need for brushing. This not only reduces the cost of brushing but also streamlines the harvesting process both this season and in any eventual expansion. 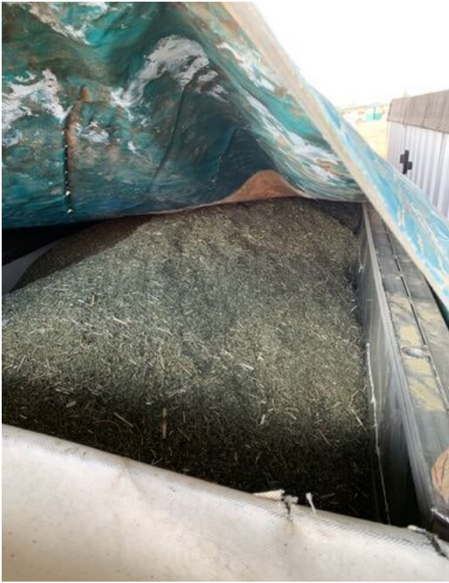 The company’s warehousing procedure is now being implemented, including bagging the biomass into supersacks (or ‘Bulka Bags’), weighing and tagging, and then storing for sale. 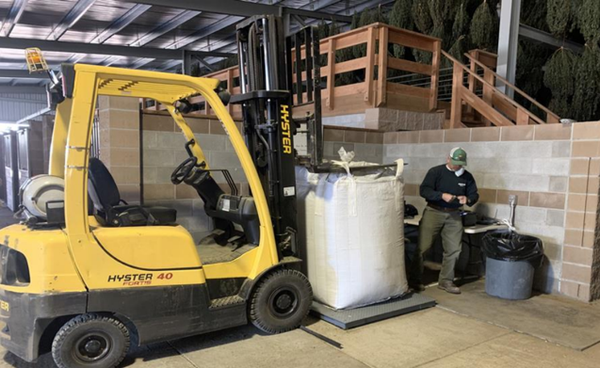 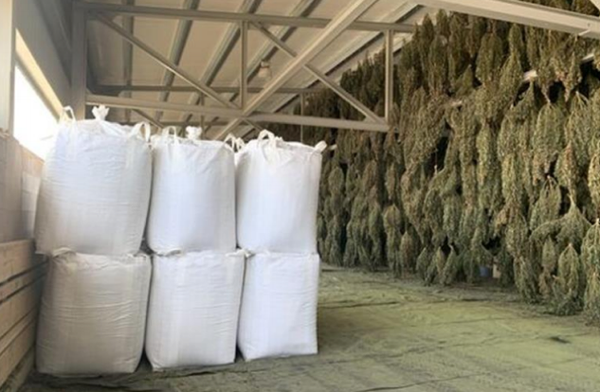 While this week’s shipment provides a good dose of reassurance that all is on track, it’s worth revisiting the stock’s recent volatility which saw it drop by as much as 17% in a day last week.

Responding to a please explain from the ASX, the company summarised the cause of the volatility and clarified the situation...

“On Thursday 17 October 2019, an employee of one of CLI's contractors who used to work at CLI's trial hemp farm in Oregon posted on his personal Instagram account a video taken by him which showed mould on the farm. The publication of this video was not authorised by CLI or the contractor.

“On Friday 18 October 2019, a Twitter user placed the same video on his personal Twitter account with the following words 'mold mold mold everywhere all mold all day'. This was picked up and shared by multiple users on the HotCopper share trading discussion site.

“As soon as CLI became aware of these events, it requested this video be removed and requested a trading halt from the ASX. It then began investigating the posts and the sequence of events.

“The information regarding the extent of mould on the plants posted by individuals on Twitter was false and misleading. It is not uncommon for farming operations to experience mould on plants. CLI estimates that less than 0.05% of the plants at CLI's trial farm have been impacted by mould, which is immaterial in the context of a 500 acre farm.”

The contractor in question has since backed up the company’s explanation, saying that the mould was present on only a very small proportion of crops.

CropLogic also used the opportunity to comment on other “fake news” that’s doing the rounds...

“Other recent posts by individuals on Twitter and HotCopper on various dates have accused the company of hiding hail and frost damage to crops, insider trading, and being stock price manipulators. CLI is concerned that this activity has been designed deliberately to create fear and doubt in the minds of ASX investors in CLI by distributing fake news.

“We do not know whether these individuals have themselves been trading in the Company’s shares or whether this is part of a strategy of manipulating the CLI share price. CLI intends to investigate these activities and take legal advice on what action can be taken.”

Alongside these statements, the company also provided a Harvest Update which reassured investors and sent the share price up 17% in the session.

In regards to the (other) rumoured issue around frost, the company say that while some frosts have been noticed, “No material effect of frost has been observed to date at the trial farm”.

CLI compared this to previous hail events in central Oregon, which were also localised and which did not affect the trial farm and may suggest a regional trend of localised weather events.

Frosts are a common occurrence in many cropping operations and are not necessarily note-worthy or cause for alarm in and of themselves. The impacts of a frost will differ between plant species and even varieties within a certain species.

A frost event is not a certain indicator of proportionate or total crop failure. The frosts that have occurred at the trial farm have been informative to management and broadened LogicalCropping and CropLogic’s agronomic and farm management understanding of the hemp plant and cropping in central Oregon generally.

Ag-tech tools such as CropLogic realTime and CropLogic Aerial Imagery – particularly drones and the recently resourced thermal imaging capabilities have also informed this process. In fact, it is thought within cropping industry circles that frosts — so long as they are followed by warm days — can assist with the drying process and observations at the trial farm suggest this to be true.

It is not the only good news to come from the trial farm.

Earlier this month, testing by a third party, ORELAP (Oregon Environmental Laboratory Accreditation Program) accredited lab, confirmed that all fields under the hemp trial farm have a THC level below the maximum limit to be treated as industrial hemp.

Under Oregonian law, hemp fields need to be tested by an Oregon Department of Agriculture (ODA) authorised lab to ensure delta-9 levels are below 0.35% — a process known in the industry as ‘compliance testing’. ORELAP is one of only some 21 labs authorised by ODA to perform industrial hemp compliance testing.

Fields at CropLogic’s hemp trial farm in central Oregon recorded results from zero (below limit of quantitation) to 0.0738% of delta-9 THC — well below the required maximum of 0.35%.

This means that all fields are compliant for them to be treated as industrial hemp and the company has been advised that this lab will be lodging these fields as such with the ODA.

CropLogic has certainly been busy and will be helped by a newly formed joint venture that is already bearing fruit.

In July, the company entered into a joint venture to grow premium CBD hemp trimmed flower with experienced Oregonian agriculturalists, the Shephard Brothers.

One of the purposes of the hemp trial farm is to trial different cropping methodologies that can be applied at scale. This includes the harvest process of this trimmed flower — generally, a six step process is being employed that includes:

Other than the biomass from the swathed three acres being brought into shedding once it has field dried, the trimmed flower process will be left now as human resources and focus is being moved to complete the hemp biomass harvest.

Work is likely to resume on the trimmed flower JV once this process is complete.

A final word on CLI

With shipment of biomass to Deschutes Labs confirmed and the controversy behind it, the hemp trial farm has provided a strong understanding of Hemp agronomy and farm management which has been added to CropLogic’s playbook for any eventual regional and international expansion.

Results to date reflect the application of CropLogic’s agronomy, farm management and ag-tech expertise. But still with a market cap of just ~$20 million, there seems to remain major potential for further investor gains as CLI’s ag-tech is adopted across agricultural markets, including the fast-growing hemp/CBD space.

CLI’s Strategic Move into Hemp CBD is Paying Off

Could CLI’s AgTech Solution Help What May Be a $22BN Hemp Market?