Given its directors’ history in medical cannabis, it not surprising that Roots (ASX:ROO) is bringing its groundbreaking Root Zone Temperature Optimization (RZTO) technology into the medical cannabis market.

For those unfamiliar with ROO, the company is developing and commercialising disruptive, modular, cutting-edge technologies to address critical agricultural problems, including plant climate management and the shortage of water for irrigation.

You can see how beneficial this would be to cannabis growers, particularly in a market that is estimated to be worth up to $31 billion in sales over the next four years.

Of course this is a big market and ROO is only just entering, so its impact is speculative at this stage and investors should seek professional financial advice if considering this stock for their portfolio.

ROO has reached agreement with American Farms Consulting LLC (AFC) to conduct a pilot using ROO’s RZTO technology as it looks to tap into the $7 billion US cannabis market.

The pilot will consist of the installation and use of RZTO technology and associated products by AFC, a licenced breeding platform for cannabis growers for the legal cannabis industry in Washington State.

AFC will use the technology to cool the roots of cannabis in part of a 30,000 sq. ft. open field license awarded to the farm owner.

If the pilot is a success, AFC will then purchase the RZTO system for future use.

The move into medical cannabis comes at a time when the company is aiming to fast track commercialisation of its agri-tech solutions.

Furthermore, ROO has completed construction of its new research and development hub, which will enable faster commercialisation to occur.

Everything looks to be falling into place for ROO as it gets set to bring its RZTO technology to market, so let’s check in on all the latest from...

We last caught up with ROO just a couple of months ago in May in the article: ROO Makes Major Off-Grid Breakthrough in Ag-Tech Using Solar Energy.

The article concentrated mainly on how ROO was attempting to commercialise its Irrigation by Condensation (IBC) technology, which it still hopes to do by the end of the year.

At the time, ROO had successfully installed the world’s first stand-alone IBC system utilising solar and/or wind energy. The system is capable of growing and sustaining entire growth cycles of food independent of the electricity grid or a normal water supply. Through the off-grid IBC system, users can produce food crops using irrigation sourced only from humidity in the air and energy from the sun or wind.

That is pretty nifty and could change the way food is produced, but whilst ROO has one eye set on the agricultural food industry, it has also now put a target on the medical marijuana industry as well.

Proof of concept for cannabis market

AFC is a full spectrum Cannabis Consulting company with expertise in horticulture, processing, operations and marketing. It provides a platform for licensed cannabis producers and processors to monetize their assets in Washington`s legal recreational program.

The company's innovative approach to farming and data collection includes the planting of a wide variety of genetic strains of both seeds and clones that are grown in local soil, using drip irrigation and two main techniques: full-term open field; and light-deprivation – all of which results in AFC`s ability to maximize value for its clients.

For ROO, the agreement with AFC means it will be the is the first time its RZTO system technology will be used in an open field: a growing cannabis production method with increasing popularity due to lower initial capital expenditures and low operating costs.

It is hoped this pilot will demonstrate how RZTO technology optimises the root zone temperatures — in this instance by cooling — until the optimum temperature of the cannabis plant is reached and maintained.

While the pilot is not expected to generate any significant revenue for Roots, it is expected to demonstrate the viability of the RTZO system for the cannabis market in general. If successful, this pilot could lead to future products sales for the ROO and long-term benefits.

Planting is scheduled for July 2018, just days from now, where, even in summer, the temperature difference between hot days and cool nights is high due to the semi-desert topography and elevation of 928 feet (283m).

Results are expected in late September 2019.

Results are speculative at this stage, so investors should seek professional financial advice if considering this stock for their portfolio.

The pilot will be deemed successful if the RZTO system cools the root systems of the cannabis seedlings and stabilises the temperature range between night and day normally occurring at this time of year in the open field. This should lead to three financial advantages for the farmer.

ROO’s CEO Sharon Devir says other parameters to be studied are the influence of Root zone cooling on flowers' cannabinoid values and composition.

Importantly, ROO is only supplying equipment to AFC and will not be engaging in any conduct that handles the cannabis plant.

Simple answer really. It is a multi-billion dollar market.

The following report by Brightfield Group suggests the global cannabis market will reach 31.4 billion in 2021, growing at an annual compound growth rate of 60%. 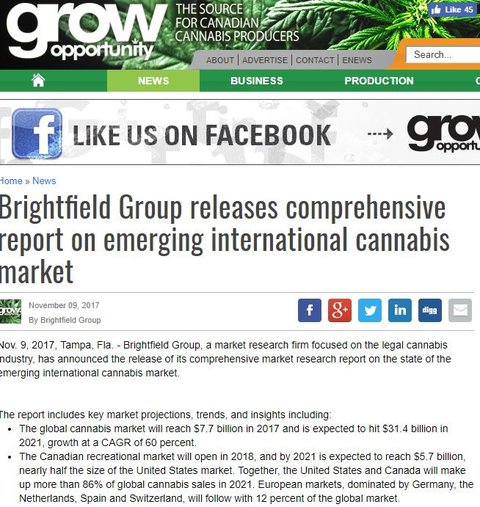 The report above suggests the market currently sits at $7.7 billion but will change quickly with regulations being de-shackled across the globe.

It is no doubt a great time to be involved with the industry, particularly with the FDA approving the first prescription drug made from marijuana.

The medical marijuana industry is likely to move fast on the back of this news, as pharmaceutical companies and growers alike will look to create their own niches.

ROO already has a leg up and with its unique technology could have a large future impact.

On the fast track to commercialisation

The move into medical marijuana is another step in the right direction for ROO as it fast tracks commercialisation.

The hub will complement local and international pilots in testing the viability of ROO’s existing agri-tech solutions, including the patented RZTO root zone and IBC technologies. This will occur on a broad range of seasonal crops in various weather conditions and would serve for testing and validation of proof of concept for new innovations.

Just to recap, the RZTO technology shortens growth cycles, increases yields and profits for farmers and will be closely analysed on several seedling and small tree crops.

The new research and development hub will also test the capability of the IBC technology to grow staple crops.

The IBC off-grid system utilises humidity in the air and energy sourced from the sun or wind to irrigate crops and operates without access to electricity or a normal water supply.

Here’s a look at the hub which will test for commercialisation options for crops using patented the RZTO and IBC technologies: 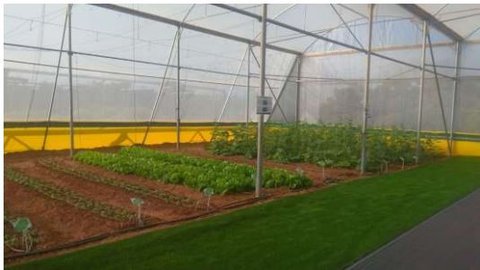 It would seem ROO is on the fast track to achieving all of its short term aims, including commercialisation.

The move into the medical cannabis space could further speed things along whilst giving it access to a multi-billion dollar industry which would provide a boon for the company.

There should be plenty of news to come out of this move into medical cannabis, as this circa $17.9 million capped agri-tech small cap looks to become a major player in not only agriculture, but also the soon to be booming medical cannabis industry.