It was only last week that we first brought Roots (ASX:ROO) to your attention. What swept this pioneering ag-tech company into frame was its first significant commercial sale to the tune of US$257,000 (A$323,000) with leading international ag-tech integrator, Dagan Agricultural Automation.

For the Israeli-based ROO, that’s a substantial market to tap into and could have a significant effect on the company’s current market cap of $26 million, especially if it is able to establish a long term commercial relationship with Dagan.

It is still an early stage play, however, so investors should seek professional financial advice if considering this stock for their portfolio.

For those unfamiliar with ROO, RZTO is a disruptive, modular, cutting-edge technology that addresses critical problems faced by the agricultural community including plant climate management and the shortage of water for irrigation.

As you may have read previously, this technology has significantly increased crop yields to 80% and simultaneously reduced energy consumption by up to 60-80%.

ROO currently has a further technology under development that is aimed to bring maximum benefit to farmers via off the grid irrigation by condensation.

Clearly ROO has a lot going on and we will go into more depth about the RZTO technology and its benefits shortly, but first let’s reintroduce you to...

You can read a more in-depth analysis of Roots (ASX:ROO) in our initial article: This Israeli Ag-Tech Stock Has Technology to Increase Crop Yields by 80%: Signs First Revenue Generating Deal in China .

In that article, we discussed how this newly listed ag-tech disruptor was already emerging as a tech pioneer in the growing ag-tech space by developing a commercialising cutting-edge technologies that tackle severe weather conditions, water shortages, high energy prices and the global food supply/demand imbalance.

The following video sums up the business proposition: 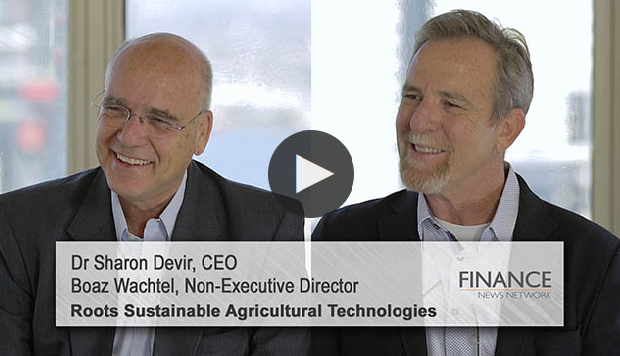 The initial deal is for three years, with the agreement providing for a two year extension and the ability to expand to include other Roots’ patented technology such as Irrigation by Condensation (IBC) and extend this exclusivity to other geographic markets.

We can’t stress enough that this deal could open up the China market which accounts for 53% of total global vegetable production.

The distribution agreement is based on minimum exclusivity target over the five-year period of US$19 million for Roots technologies. This constitutes US$3 million in year-three; US$6 million in year-four; and US$10 million in sales in year-five.

This agreement follows hot on the heels of its US$257,000 (A$323,000) agreement with Dagan that was the focus of our previous article.

Dr Sharon Devir, CEO and Co-founder believes this agreement with Dagan will enable Roots to significantly expand its presence in China especially as China faces population challenges (three times the number of people per area unit of land as the rest of the world), a growing middle class demand for more protein in diets, and local land and water resource constraints that make production increases a challenge.

ROO is looking to meet these challenges head on as it establishes a long term commercial relationship with Dagan.

The relationship not only serves ROO’s global expansion plans, but also acts as an endorsement of ROO’s technology and its ability to help address some of the critical agricultural production and pollution challenges this market faces.

ROO has set conservative sales targets over the five-year period, allowing the first two years to focus on establishing sales networks and showcasing proof of capability, with resulting sales activity in years three to five.

The latest deal with Dagan could see ROO take a major stake in the China vegetable market, but if news continues to flow as it has in recent weeks it may also have a significant impact on its very moderate $26 million market cap.

You can read our full report on ROO in our initial article , however as you can see ROO is acting quickly to confirm its place as a pioneer in the ag-tech space and the news is already flowing. This time to the tune of US$19 million.