AHI Back from Voluntary Suspension - Could a Large Deal be Brewing?

One of the best long term performers in our portfolio, Advanced Human Imaging ASX:AHI (formerly known as MyFiziq) is now out of voluntary suspension and has peppered the market with three announcements on its return.

We also noticed something pretty interesting about AHI’s suspension buried in the price query response from AHI...

Now we aren’t ASX lawyers but our take on the wording is that AHI had some sort of large deal brewing that needed ASX approval due to its magnitude, but AHI has now put that deal on hold so as not to interfere with AHI’s upcoming NASDAQ listing.... More on this below.

AHI has developed an accessible, advanced human imaging platform on a smartphone for the med-health, population health, fitness and insurance sectors.

AHI’s strategy is to develop and acquire human imaging tech and distribute it via partners with large audiences that would benefit from human imaging.

We are long term holders as we like the technology, the health tech sector, upcoming NASDAQ listing and the company has cash in the bank after raising $5M late last year.

So what was so interesting about AHI’s price query response yesterday?

Again, we aren't ASX lawyers but If you read into AHI’s response to the ASX price query it sounds like AHI had some sort of mysterious large transaction brewing.

After the suspension and extensive submissions to the ASX about this deal they decided not to proceed "at this time" so as not to interfere with their upcoming NASDAQ listing...

First we need to understand what a “ASX Chapter 11” transaction is - basically when an ASX listed company proposes a deal that is so big compared to its size that it fundamentally changes the business, like a significant merger or acquisition, and they need to get approval from the ASX to do the transaction:

AHI says they met with ASX on March 30 to "discuss a potential Chapter 11 transaction”.

Our interpretation of this is that AHI had some sort of early stage, big deal in the works and wanted to get an early approval from the ASX to do said deal.

AHI’s share price had a little run up on the same day (March 30th) popping up from around $1.80 to $2.05... which the ASX took exception to and slapped on the price query and suspension.

AHI then proceeds to list a few of the reasons that its price was running on March 30th and made “extensive submissions” about the potential deal - but now say they “decided not to proceed at this time” with this “Chapter 11 sized” deal as it interferes with their NASDAQ listing timing.

In its response AHI’s “Extensive submissions” about this proposed deal tell us that AHI was pretty keen on this deal, or they wouldn’t have put all the effort into the submissions.

We can only assume this mysterious deal AHI was working on (whatever it was is big enough to trigger an ASX Chapter 11 and need ASX approval) has been put on ice until the NASDAQ listing is completed, but it may possibly be off the table completely now - this is our speculation and we will find out after the NASDAQ listing.

Why we invested in AHI (Formerly - MYQ)

AHI is a health tech sector (which is currently running hot), with a timeline to list on the US NASDAQ - three factors that set them up for success.

Also they are growing out a unique offering with compelling acquisitions to assist growth.

Here is AHI’s latest and greatest pitch deck from their website.

AHI’s new announcements after they came back from suspension

Another reason we like AHI is that it continues to globalise its technology, which is reflected in this week’s announcements:

AHI makes money by letting larger companies integrate the AHI 3D body scan into their products and services for a fee, so it can be used across multiple industries.

AHI has signed over a dozen partners with over 500,000,000 potential users in their ecosystems.

Here is all our past commentary on AHI (formerly MYQ). 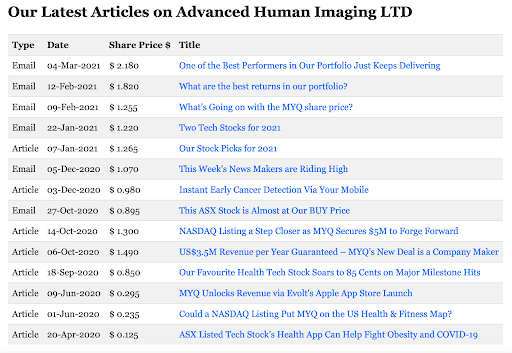 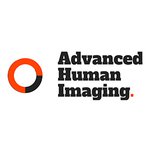