Virtually every Australian adult withdraws cash from an ATM on a regular basis. And the times we don’t use cash are usually bridged by the use of debit or credit cards for daily transactions.

Think about the market size of these simple services alone.

Now consider about a sub-$20 million capped company on the ASX making major inroads in these two areas, plus several more.

Stargroup Limited (ASX:STL) are competing in the ATM and cashless payments playoffs — and nabbing victory after victory.

Its latest win was announced in early September — a Joint Venture with DigitalX to develop Bitcoin ATMs. The ‘Two-Way ATM’ solution will assist users or investors to buy and sell Bitcoin with ease.

There are currently fewer than 20 ATMs in Australia that can facilitate Bitcoin transaction, with conversion fees in the 4-8% range. Of these, most are only capable of one-way transactions... meaning the ability to add Bitcoin to their wallet via the ATM.

The new ATMs resulting from the JV will not only enable users to acquire Bitcoin but will also instantly convert them to Australian dollars via the ATM.

Typically, Bitcoin users looking to sell the asset have to wait days to access the cash using online digital currency exchanges. So this will almost certainly address a real ‘pain point’ for those invested in the cryptocurrency, specifically the fact that while Bitcoin can be bought with relative ease, it is difficult to cash out.

In June, the company increased its ATM network by a further 35% with the acquisition of Fastcash ATM. This took their total number to 512 ATMs across the country... and their projected annualised 2018 revenue from $17.9 million to $20.1 million.

These 512 ATMs are estimated to process in the vicinity of 4.5 million transaction a year.

Those are some big numbers, and that’s just for STL’s ATM business alone.

It should be noted, however, that this is an early stage tech company and success is no guarantee. Investors should seek professional financial advice before making an investment.

But as we hinted at earlier, it’s not just the ATM space that the small-cap is looking to dominate. It also has three other product arms including Star Payments, StarPOS and StarLink.

StarPOS is an EFTPOS and payWave technologies provider, as well as developer of the source code in its terminals via its five year distribution agreement with West International AB, a Swedish NASDAQ listed company.

Then there’s StarLink — one of a handful of independent ATM processing providers in Australia outside the major banks. The goal here is for STL to attract more IADs and smaller banks to StarLink, which currently has a network size larger than some of the banks and is the #2 independent operator

This is made all the more possible by STL’s acquisition of Indue in May.

Lastly, STL’s Star Payments arm is focused on advanced cash monitoring technologies to monitor ATM performance and cash replenishment cycle under development — a market currently dominated by one or two large providers who have been providing services to IADs (independent ATM deployers) unchallenged for quite a while.

To get more of an idea of STL’s background you can read our article from last year . At that time STL had exceeded all expectations by ticking off its 12 th consecutive quarter of record revenue growth.

But for now, it’s time to check out the latest and greatest from this small-cap superstar: 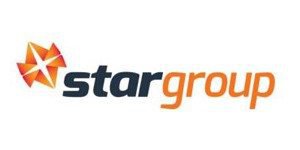 A good business model will get you far, particularly when you’re the only pure-play ASX-listed ATM operator. And even more so when, despite all that leverage, your market capitalisation is still only $14.55 million. That means there’s a long way you can go, and in STL’s case, signs are pointing to it being up.

Now they’re just showing off, but wouldn’t you, if you were STL? 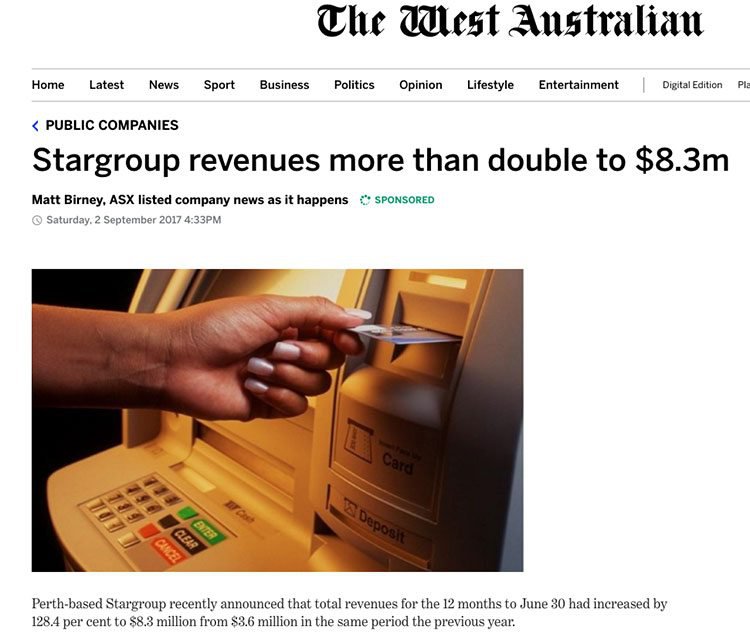 STL keep racking up the jaw-dropping deals and acquisitions, and its latest JV with DCC is no exception.

The signing of a joint venture agreement to tailor and offer a “Two-Way ATM” solution for buying and selling Bitcoin. 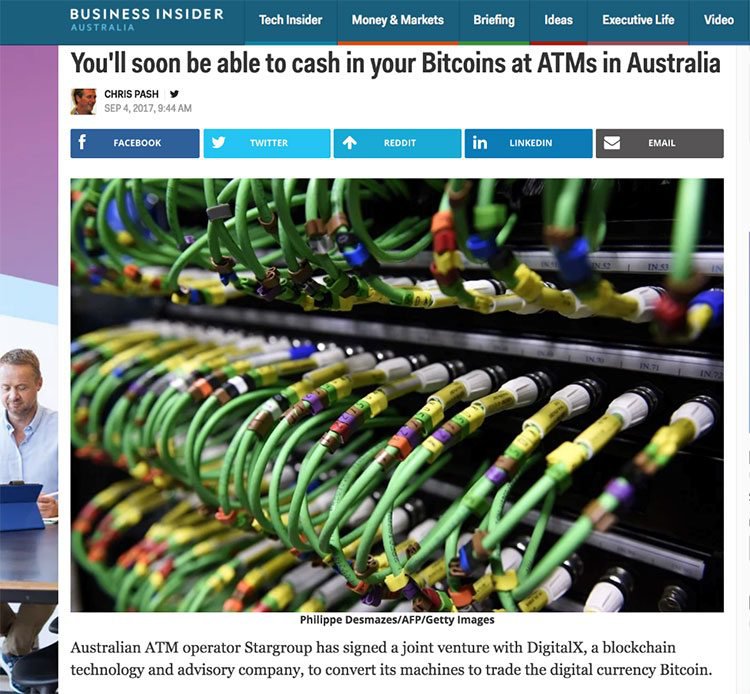 DCC – an equally savyy small cap which has leveraged Blockchain technology and the secure ledger system to create cutting edge technologies are more than happy to partner with STL, considering it will be able to utilise the latter’s entire global network of ATMs...

You may be familiar with the name DigitalX. That’s because we know how to pick the good ones, and we have written about the company before ... these guys are forerunners in the Blockchain solutions space.

Currently, cashing out one’s Bitcoins can take days via existing Australian online digital currency exchanges. And that’s where the introduction of accessible Two-Way Stargroup ATMs are expected meet a growing demand... for a growing user base. The Bitcoin market has grown from less than $20 billion at the start of the year to over $70 billion now.

So, it’s not at all a crazy prospect to address a need for a large-scale ATM roll-out to service these users.

How much of this market this company can tap into remains to be seen, so investors should seek professional financial advice for further information if considering this stock for their portfolio.

Right now there aren’t even 20 ATMs in the country which can facilitate Bitcoin transactions, and of those that can, most impose steep charges of around 4-8% transaction value...

On top of that, most of these are only “One-Way ATMs,” so users can only acquire Bitcoin and add it to their Bitcoin wallet, whereas STL and DCC’s combined offering will provide instant Bitcoin to AUD cash out as well.

Both companies need to meet the following conditions for the JV to be binding:

Of course, this could mean there’s potential to expand the technology to other cryptocurrencies, and in other countries. Considering the momentum of the last 12 months, there could be huge profits to be made over the long term.

Another acquisition to shore up STL’s ambitions

In June, the company informed the market it had acquired Fastcash ATM, and thereby increased its ATM network by another 35%. 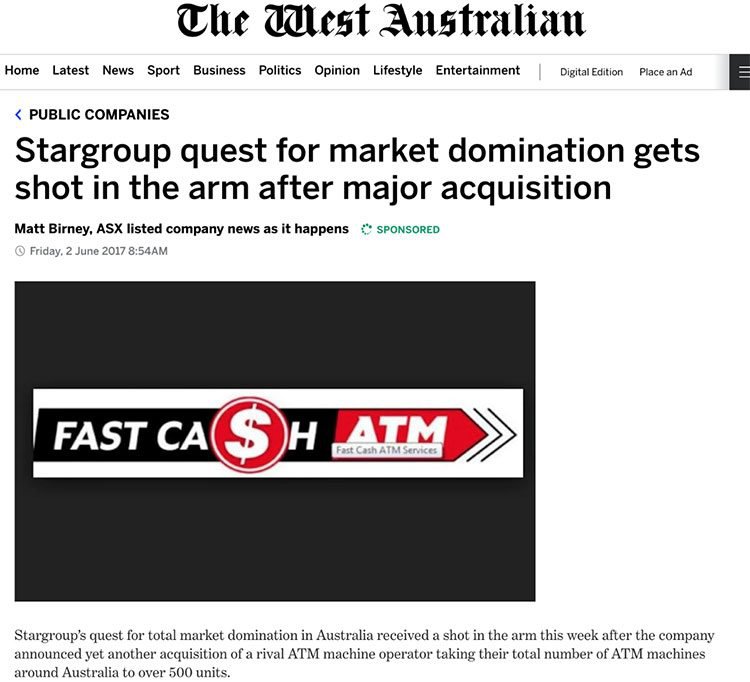 The acquisition nudges the company’s projected before tax earnings up a cool mill for the 2018 financial year, from $4.7 million to $5.7 million... and their total number of ATMs growing to 512 machines. Lastly, their projected annual 2018 revenue rose from $17.9 million to $20.1 million.

After all’s said and done, STL will have a network of ATMs processing some 4.5 million transactions a year, with the acquisition netting the company 134 machines across NSW where the Fastcash network has been operating for more than seven years.

Helpfully, the network was already using STL’s StarLink as its payment processor, which means the transition is set to be relatively straight forward.

STL paid $4.2 million by way of a drawdown of a $7.5 million funding facility. The Fastcash deal was brokered as part of discussions regarding STL’s acquisition of Indue earlier in the year – and will add to its impressive looking stable of assets.

Now management can focus on organic growth and developing all four arms of the Stargroup business model, as well as the targeting of smaller unlisted ATM deployers for any potential mergers or acquisitions in the future...

Gaming Expo – a chance to exhibit for STL

Among all of that news was some smaller wins that could also pay dividends for the company down the track.

Some expo-goers enjoying themselves at the 2017 event: 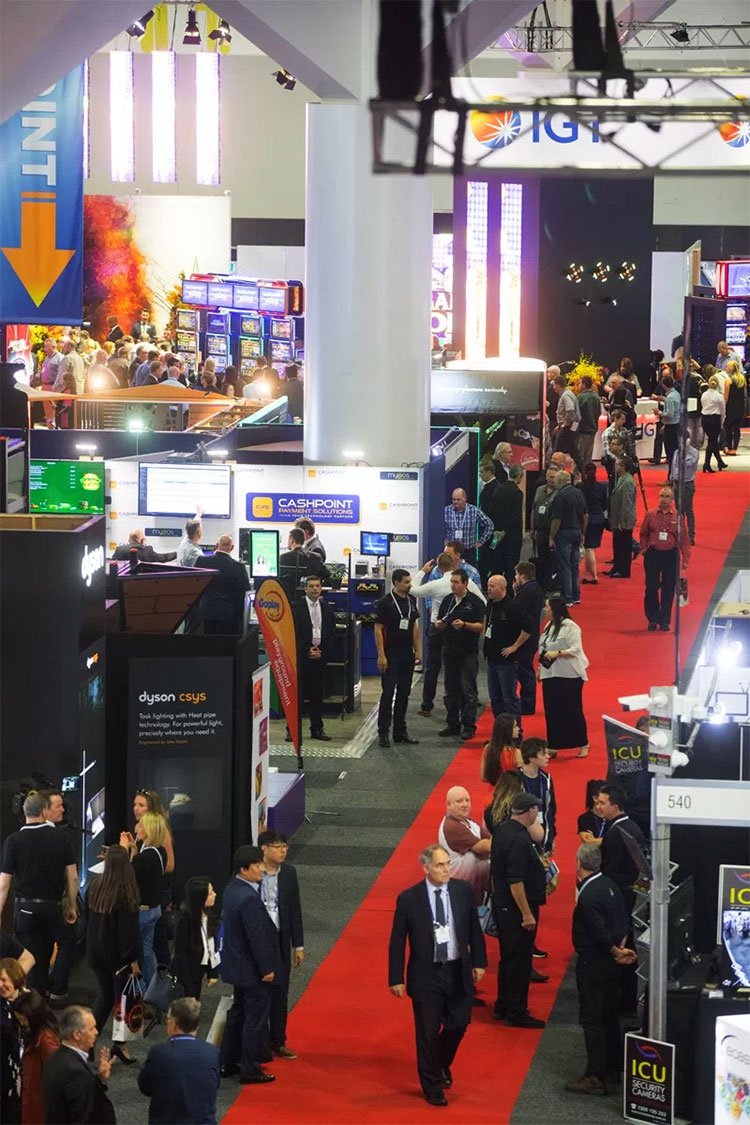 The product set launched at the Expo were manufactured by NeoICP — a South Korean private company of which STL owns an 11.1% stake. The products have already been deployed by NeoICP in casinos in Korea, Macau and several other Asian countries — now the aim is to tailor them to Australian consumers.

The casino table deposit solution automates the acceptance of up to five different currencies at the gaming table, to fast-track the provision of gambling chips to casino customers while providing live data to casino operators.

Another product launched at the expo can convert up to four different currencies into a local currency via a terminal for use in popular tourist areas.

As you can see, STL are looking to penetrate multiple markets at once, while simultaneously ramping up its presence in its core area of expertise — ATMs. It’s a strategy that’s hard to poke too many holes in.

Certainly there is strong sentiment around about ATMs. Recently the Big Four banks agreed to drop ATM fees to much cheering from consumers and commentators. This presented an opportunity for small-caps operating in the space... 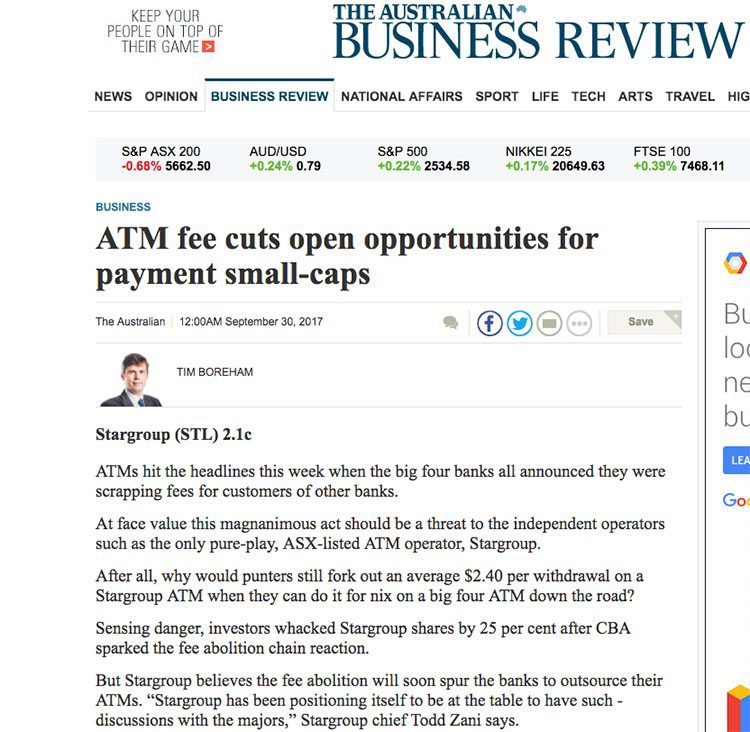 Why? It’s quite simple, really.

STL could feasibly run the ATMs cheaper (most of the banks ATM hardware is older and dated), with the company currently owning a similar amount of ATMs to the amount run by ANZ and NAB. With the banks all agreeing to cut their own ATM fees, they may look to outsource... to STL.

It is an early stage, speculative stock however, so investors should seek professional financial advice if considering this company for their portfolio.

Following a 12 th consecutive quarter of record revenue growth, STL entered a period over the last 12 months where it seemed to lose its way, in terms of its share price, anyway. Considering it’s looking the goods in almost all other areas, this is intriguing.

There’s a good chance the price slide actually reflected retail investor sentiment — those who were watching the ongoing debate around bank ATM fees.

Yet STL’s offering differs in one key way. Fee-free bank ATMs are unlikely to cut into the revenues STL currently brings in with its fleet of ATMs which do charge a fee. That’s mostly because of where the machines are located. They can be found in venues like pubs, clubs, service stations and 7-Elevens; places where, for the customer, the siren call is all about convenience.

Despite short-term share price volatility, there’s a lot going right for this small-cap tech play... and they seem to be in the right arena at the right time.

Investors may start to recognise the significant opportunity at hand as the current price arguably puts STL at a considerable bargain. As usual, only time will tell. 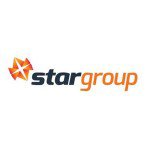 STL’s EBITDA Rising on the Back of Rapid Acquisitions